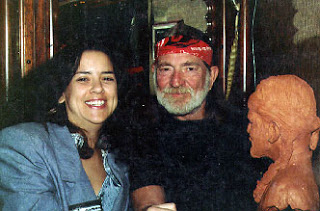 People often ask me what it was like to sculpt someone famous. Really it is the same as sculpting anyone else. Each subject adds their own nuances to the sculpture.

For example B. B. King was wonderful to work with. Bill Monroe on the other hand was a harder nut to crack. I was able to soften him up a bit, even to the point where he hit me in the arm with his elbow as we were walking from the Grand Ole Opry.

I have enjoyed not only the sculpting of those who are famous, but also the research about them. I love history, and studying about an individual is a study in history. Especially if they have played roll in shaping that history, either politically, like Jesse Jones, or musically like B. B. King Willie Nelson, and Bill Monroe.

A funny story about B. B. King

I was a sitting, next to B. B. King, calipers in my lap and I said, “Mr. King, I will have to touch you in this sitting.”

I know some people have a problem with people touching them especially their face, so I thought I should say something.

He replied, “Oh darling, you are already touching me!”

I looked at the calipers in my lap and him and said, “I don’t know what you mean.”

He said, “Your thigh is against my thigh and believe me the thrill is not gone!”

I love my stories about sculpting.

By the way, I equally enjoy sculpting for those people who just think their subject is a star!

Bridgette Mongeon is a writer/sculptor/speaker/and educator. She enjoys assisting others in their individual creative endeavors and does this through writing, video and podcasts.