Jennifer has been at the studio today, once again putting clay on the armature. I laughed at myself this weekend thinking about how funny an armature looks in the beginning and how I will most likely have to beat it into submission. I want to get to work at putting the clay on the torso, but I’ll let Jennifer do that. My job is to get going on the bust.

As I sit down to work on Dick, I hear the voices of some of the other professors like Charlotte, and Maida telling me about Dick. While at residency last spring I asked Maida about how Dick would sit. She approaches each answer cautiously but with such sincerity, love and admiration. I wonder, can I kneed and massage those things into the clay-t

he love? It is exactly those types of encounters that I count on in capturing the deceased. I pull from the memories of those who knew and loved the one who is no longer here.

Thoughts of Charlotte come up. Sometimes I feel like she is there sculpting with me, or hanging out in the studio.

Luckily, with this commission, I have the added benefit of actually meeting Dick Hathaway. There is only one other man I have ever met in my life who had such charm, who was so totally endearing. It has to be over 20 years ago now. I was in Boca Raton and started to sculpt in the sand. The sand seemed so temporary. I did not have to worry about anyone approving my artwork. In the morning after the tide came it would be gone. Of course I sculpted people. While on this vacation I was introduced to a woman who had a bust of her deceased husband. I was so enthused by it. I had never really sculpted before and I wanted to know how it was done. ( I did create a bust of Christ in junior high and an elephant in grade school ) At this time in my life, 20+ years ago, I was working in the advertising industry and also painting. I had also been studying a great deal about creativity. I felt stifled as an artist and wanted to know why.

Dick Reminds me of Peter Peach another man with charm and charisma who lived in Florida. I had heard about him. Something about how creative he was and how he once had this great idea years ago about putting movies on TV, but the television people said, “Who would want to watch a movie on TV?” He also was one of the originators of the Bullwinkle Cartoon. He and his wife had been watching me sculpt in the sand as they stood on their balcony. When we finally met he looked at me very firmly and said. “You have a great talent, you must go forward with it.” At the time I had no idea it would be sculpting. I came home found some books and taught myself how to sculpt. It was amazing the first time I did. I felt so at home. Somehow Peter Peach knew something I didn’t. 20+ years later, here I am sculpting.

The clay that I am working with right now is nothing, a blob to some people; I take my knife and begin to carve away at the skull shape. Even though there is nothing of any resemblance, I can feel Dick. I slip his glasses on the shape and quickly add some ears and more of a nose. (I have added tape to protect to the lenses of the glass) The piece does not feel correct until I continue to add a neck and then a bit of a collar. The collar helps me to be able to compare the photographs of him with the clay. I’ll take it off later. I am using many of the composite photographs from the video. Even at this stage I find myself talking to the clay, jokingly, I say, “Wear are you Dick?”

I think about the age of the man as I add the neck wattle and notice the sagging cheeks. I have several photographs of Dick when he was younger and Maida had expressed an interest in me doing Dick as a younger man. Again I hear her incredible love as she speaks the words. I feel her missing him. I realize that this sculpture is as much a part of everyone that loved Dick and expressed that to me, as it is about Dick. Maybe that is where the passion comes from in my work, why people say they “feel” so much about a certain piece. 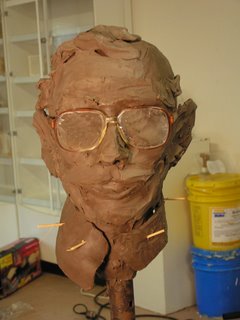 I spoke with a friend this weekend about creating what I referred to as “the lovely”. She creates portraits and flowers in oil and I love-sculpting people. Some people have not learned or do not wish to tap into “the lovely” and instead they create out of angst and somehow that is transferred to the art. I am not sure how. I do know that my feelings while working on a piece are very important. If I am mad or angry or irritated somehow that transfers to the art. I have pieces that I have created that I just don’t like looking at, and others have expressed that though they feel the pieces are artistically correct, they are really not as appealing as my other work. They don’t know why, but I do. The negative emotion somehow gets mixed in the clay and resides there. When I think of Maida or Charlotte, Nancy, Dick’s daughter or Ruth, Dick’s wife, it is these feelings that I transfer.

I have already aged Dick even in this beginning stage. The wattle, the cheeks the receding hair line. It is funny because as I started, just 40 minutes ago, I knew I had a younger man, but an older Dick is emerging and it is just beginning. If I had more references of him at a younger age I would attempt a younger pose but it takes more focus on my part to work with age progression or in this case age regression.

Bridgette Mongeon is a writer/sculptor/speaker/and educator. She enjoys assisting others in their individual creative endeavors and does this through writing, video and podcasts.